NEO asteroid (4179) Toutatis was discovered by Christian Pollas with the 0.9-m Schmidt at Caussols (France) on 1989, Jan. 4 (IAUC 4701). It is funny to note its naming citation:
“Named after the Gaulish god, protector of the tribe.  This totemic deity is well known because of the cartoon series “Les aventures d’Asterix” by Uderzo and Goscinny.  This tells the stories of two almost fearless heroes living in the last village under siege in Roman-occupied Gaul in 50 B.C., and whose only fear is that the sky may fall onto their heads one day. Since this object is the Apollo object with the smallest inclination known, it is a good candidate to fall on our heads one of these days…  But as the chief of the village always says: “C’est pas demain la veille…” (tomorrow it’s not the day…)
Toutatis is an irregular and very elongated object, with a very slow rotation period of 5.4 days (about the long axis). It approaches Earth at four-year interval, so it has been extensively studied with radar in every perigee.
This last passage, on  2012, December 12, was very favourable with a minimum distance of 0.0463 AU (18 LD): the next time it will approach closer will be in November 2069!
NASA radar team are conducting an extensive campaign using the Goldstone 70-m antenna, from Dec. 4 to 22.
Here you can find images and information about their valuable observations:
http://echo.jpl.nasa.gov/asteroids/Toutatis2012/Toutatis2012_planning.html

Radar imaging is an amazing source of information about asteroids: measurements of the distribution of echo power in time delay (range) and Doppler frequency (radial velocity) create a two-dimensional images that can provide spatial resolution as fine as 4m/pixel (at Goldstone). With good coverage in time these images can be used to define the rotation period, shape and to constrain the object’s internal density distribution.
Here is my image taken just before the closest approach:

On the same date, here is the Goldstone image:

Toutatis was also imaged by Chang’E 2 Chinese spacecraft on Dec. 13, and the image below was obtained from an minimum altitude of 93km. The lower-left image has a resolution of 10m: 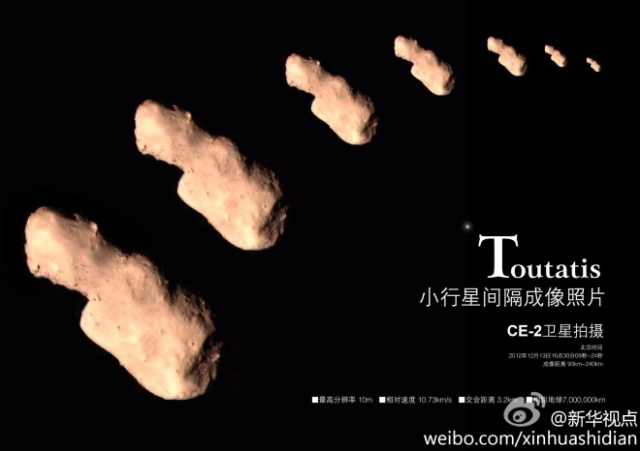