(99942) Apophis (formerly known as 2004 MN4) was discovered on 2004 Jun. 19 by R. Tucker, D. Tholen and F. Bernardi from Kitt Peak National Observatory, and observed just for a 1-day arc.
On 2004 Dec. 18, in the normal course of the Siding Spring Survey conducted with the 0.5-m Uppsala Schmidt, G. Garradd discovered an object that was subsequently linked by the MPC to 2004 MN4. With a 6 months arc, one-night prediscovery observations were found by 691 Spacewatch back to Mar. 15.
Orbital elements calculated with all these observations indicated a probability up to 2.7% (1 in 37) that it would strike the Earth in 2029. It broke the record for the highest level on the Torino Scale, being, for only a short time, a level 4.
Additional optical and (especially) radar observations conducted in early 2005 eliminated this threat: it will pass very close to the Earth, but at a “safely” distance no closer than 29,470 km, inside the geosynchronous belt.
At closest approach, it will reach naked-eye magnitude of around 3.4, with a maximum speed of 42°/hour.
A small probability (around 1 in 250,000) however remains for an impact in April, 2036. Radar observations will be conducted again in 2013, and from those measurements astronomers will confirm or (most surely) eliminate this possibility.
Actually Apophis, which has an estimated diameter of around 350 meters, is in constellation Pisces at 67° Sun elongation, and its magnitude is close to 20.5 V, the brightest since the beginning of the next year, when it will reach perigee (2013 01 09) at a distance of 0.0967 AU (or 37 LD).
Astronomical Research Institute (ARI, code H21) and our observatory (code 204) conducted observations on 2012 Jan. 10 and 11, producing astrometry that was published on MPEC 2012-A51.
Here is my image: 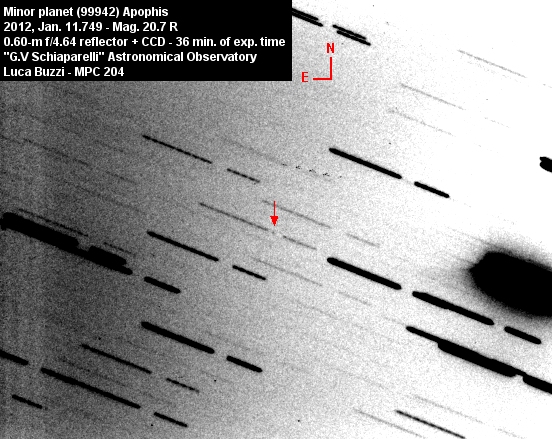